C&K Connectors have landed on Mars with the InSight mission 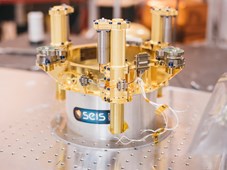 On Earth, a problem with a connector is bad enough – but it can usually be fixed, or the faulty component replaced.

On Mars, there’s no margin for error. If something goes wrong, you’re many millions of kilometers away from help. Ultra-high reliability is a basic requirement for any interplanetary mission – the smallest problem can mean years of effort and millions of dollars are wasted.

Thankfully, NASA’s latest mission has been smooth sailing all the way. After travelling 548 million kilometers, the InSight spacecraft recently landed safely on Mars.

Over the next two years, InSight will aim to answer fundamental questions about how the red planet was formed 4.5 billion years ago, and more generally how other rocky planets could have been created.

Mars gives us a unique opportunity to gain such knowledge. It is big enough to have undergone most of the early processes that shaped Earth-like planets, but, unlike Earth, small enough to still have evidence of those processes. (To learn more on NASA's project, you can click here.)

To capture data on Mars and its structure, the InSight spacecraft carries several highly sophisticated, accurate instruments. This will enable it to be first mission to study the interior of Mars in detail: its crust, mantle and core.

One of InSight’s three primary instruments is the Seismic Experiment for Interior Structure (SEIS). This is a seismometer, which will measure tiny vibrations, giving us new information on the planet’s structure and its internal activity.

The seismometer is based around three titanium pendulums, one for each axis, which are free to move within a protective sphere. When the ground moves, its vibrations make the pendulums move in relation to the rest of the seismometer, and this displacement can be measured.

SEIS will measure these vibrations, or seismic waves, caused by ‘marsquakes’, as well as vibrations at the surface caused by dust storms and atmospheric turbulence. It will do this with incredible sensitivity: the seismometer can detect movements that are smaller than an atom of hydrogen.

These measurements will tell us more about Mars’ inner secrets: how it was formed, what is within the planet, and even if there’s liquid water beneath its surface. (To learn more on this topic, you can visit the website focusing on Seis here.)

To ensure it can operate as designed, every component in InSight’s seismometer must do its job for the duration of the mission. C&K Micro-D connectors are one of the small but vital components in SEIS, and provide the reliability that’s essential for enabling the traffic of communications and data on such a high-profile mission.

The Micro-D connectors are compliant with ESA specifications, and are compact and low weight. They are part of C&K’s range of high-reliability connectors, which are chosen by space agencies around the world for demanding applications in satellites, launchers, telescopes and other spacecraft. The connectors are qualified to ESA-ESCC, MIL-M24308 and GSFC-311P, and exhibit no degassing, no magnetism, and no defects in harsh environments.

InSight may be a long way from home, but NASA’s engineers can be confident that its connectors won’t let it down.